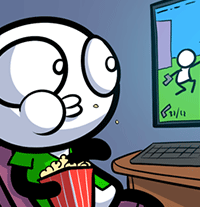 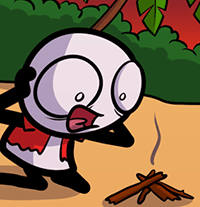 Surprise! New comic on a MONDAY?? I know! I had this idea after I streamed, and I didn’t want it to take up the usual Loading Artist time-slot, so I’m posting it now. I’m choosing NOT to submit this as a patreon-supported comic as it’s very pop-culture/gaming-specific and isn’t the kind of Loading Artist comic you signed up to support! I’ve also added a little indicator on the thumbnail so it’s easy to tell it apart. More on that in a blog post later. Yes there’s still going to be a new Loading Artist comic on Thursday!

The streaming I did over the weekend was fun! Thanks to everyone who joined! We finished Until Dawn in one (long) sitting. I’d like to do more, with a different game, and a better mic! Follow me on Twitch here! I’ll also be tweeting out when I start!

Behind The Scenes HD Versions

and
Want to become a VIP?