I thought it might be interesting to look back and see which Loading Artist comics were viewed the most this year, and then try to give a couple reasons as to why that may be.

Bear in mind these stats do not include any views on reposted versions like on Imgur or on other Facebook pages, etc.

Doing this from 5th to 1st to build that SUSPENSE…!

While I think this one is good enough to gather a lot of views on it’s own merits, I think it being the first ‘gag-a-day’ Loading Artist comic with the new website layout prompted more shares.

Also, I think that’s the best looking girl character I’ve drawn (not that it has anything to do with it (or does it..)).

I think the gag at the beginning is what makes this comic what it is. Also it’s about Bitcoin and that was a hot topic around that time.

FUN FACT: I have an actual ‘Donate Bitcoins’ button beneath that comic.

I’m really happy with the pacing in this one. I feel the overlapping speech bubbles at the end add a lot to the timing.

Also there is a cat. 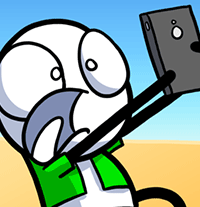 This is one of my favourite comics I’ve drawn. I’d chalk it up to the combination of colourful visuals (though not too detailed) and length (though not too wordy) with the morbid twist. 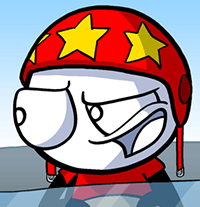 ‘Born Ready’ was interesting to me because it sparked a lot of ‘I don’t get it’ responses (compared to other ones), and yet it was also many people’s favourite comic in a while.

However I think the reason it is the #1 viewed Loading Artist comic this year is mainly because it was the comic that was up while I disappeared to America for two months.

So there you have it. I hope this was somewhat interesting for you, so it doesn’t just seem like I’m rambling about the greatness of my comics and what makes them so great.

I have one more blog post planned before the end of the year which goes over what happened with Loading Artist in 2014. Thanks for reading!